PCMark Vantage is the first objective hardware performance benchmark for PCs running 32 and 64 bit versions of Microsoft Windows Vista. PCMark Vantage is perfectly suited for benchmarking any type of Microsoft Windows Vista PC, from multimedia home entertainment systems and laptops to dedicated workstations and high-end gaming rigs. Regardless of whether the benchmarker is an artist, or an IT Professional, PCMark Vantage shows the user where their system soars, or falls flat, and how to get the most performance possible out of their hardware. PCMark Vantage is easy enough for even the most casual enthusiast to use, yet supports in-depth, professional industry grade testing.
The reason we like PCMark Vantage is because the recorded traces are played back without system stops. What we see is the raw performance of the drive. This allows us to see a marked difference between scoring that other trace based benchmarks do not exhibit. An example of a marked difference in scoring on the same drive would be empty vs. filled vs. steady state.
We run Vantage three different ways. The first run is with the OS drive/Array 75% full to simulate a lightly used OS volume filled with data to an amount we feel is common for most users. The second run is with the OS volume written into a “Steady State” utilizing SNIA’s guidelines (Rev 1.1). Steady state testing simulates a drive/array’s performance, similar to that of a drive/array that has been subjected to consumer workloads for extensive amounts of time. The third run is a Vantage HDD test with the test drive/array attached as an empty lightly used secondary device.
As you can see, there’s a big difference between an empty drive/array, one that’s 75% full/used, and one that’s in a steady state.
The important scores to pay attention to are “OS Volume Steady State” and, “OS Volume 75% full”. These two categories are most important because they are indicative of typical consumer based user states.
When a drive/array is in a steady state it means garbage collection is running at the same time it’s reading/writing. There’s a huge difference in performance between a single drive and a two drive array. Our mSATA array manages to come in third place. This test seems to be writing enough data to get outside of the mSATA EVO’s Turbo Write layer, at least part of the time.
We are going to introduce a new “Heavy Usage Model” test in upcoming reviews, and the Steady State portion of this test will become our “Light Usage Model” test. Samsung drives perform exceptionally well in what we consider a “Light Usage Model” scenario.
Version and / or Patch Used: 1.4.00
Developer Homepage: http://www.futuremark.com
Product Homepage: http://www.futuremark.com/benchmarks/pcmark7
PCMark 7 includes seven PC tests for Windows 7 & 8, combining more than 25 individual workloads covering storage, computation, image and video manipulation, web browsing, and gaming. Specifically designed to cover the full range of PC hardware from netbooks and tablets to notebooks and desktops, PCMark 7 offers complete PC performance testing for Windows 7 & 8 for home and business use.
We will look to the raw system storage scoring for RAID 0 evaluations because it’s done without system stops, and therefore allows us to see significant scoring differences between drives/arrays.
PCMark 7 testing definitely writes enough data to fall outside of our mSATA EVO array’s accelerated write layer for a good portion of the test. Our mSATA EVO array delivers a good performance, but nothing like what our larger 500GB based EVO array can deliver.
The 500GB EVO has a larger capacity Turbo Write layer, as well as better base write performance, which is the reason for the fairly large performance gap between the two arrays.
Version and / or Patch Used: 1.2.157
Developer Homepage: http://www.futuremark.com
Product Homepage: http://www.futuremark.com/benchmarks/pcmark8 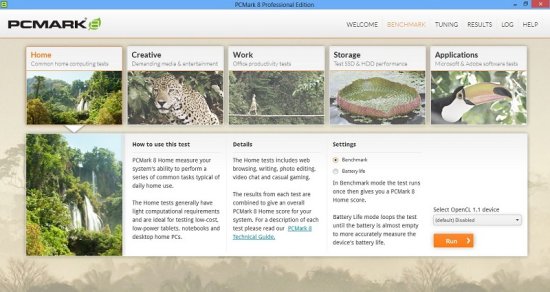 Deutschland: Finde andere Technik- und Computerprodukte wie dieses auf Amazon.de
Jon Coulter
Jon joined the TweakTown team in 2013 and has since reviewed 100s of new storage products. Jon became a computer enthusiast when Windows XP launched. He was into water cooling and benching ATI video cards with modded drivers. Jon has been building computers for others for more than 10 years. Jon became a storage enthusiast the day he first booted an Intel X25-M G1 80GB SSD. Look for Jon to bring consumer SSD reviews into the spotlight.